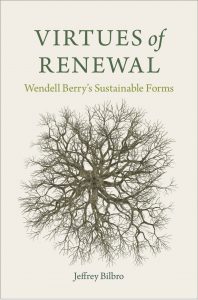 For over fifty years, Wendell Berry has argued that our most pressing ecological and cultural need is a renewed formal intelligence—a mode of thinking and acting that fosters the health of the earth and its beings. Yet the present industrial economy prioritizes a technical, self-centered way of relating to the world that often demands and rewards busyness over thoughtful observation, independence over relationships, and replacing over repairing. Such a system is both unsustainable and results in destructive, far-reaching consequences for our society and land.

In Virtues of Renewal: Wendell Berry’s Sustainable Forms, Jeffrey Bilbro combines textual analysis and cultural criticism to explain how Berry’s literary forms encourage readers to practice virtues of renewal. While the written word alone cannot enact change, Bilbro asserts that Berry’s poetry, essays, and fiction can inspire people to, as Berry writes, “practice resurrection.” Bilbro examines the distinct, yet symbiotic, features of these three genres, demonstrating the importance of the humanities in supporting tenable economies. He uses Berry’s pieces to suggest the need for more robust language for discussing conservation, ecology, and the natural—and regenerative—process of death. Bilbro additionally translates Berry’s literature to a wider audience, putting him in conversation with philosophers and theologians such as Ivan Illich, Willie Jennings, Charles Taylor, and Augustine.

The lessons that Berry and his work have to offer are not only for those interested in cultivating the land, but also for those who cultivate their communities and live mindfully. In short, these lessons are pertinent to all who are willing to make an effort to live the examined life. Such formative work is not dramatic or quick, but it can foster the deep and lasting transformation necessary to develop a more sustainable culture and economy.

“Bilbro’s book is much more than a splendid celebration of the rich oeuvre of Wendell Berry—it is an eloquent invitation, companionable with Berry’s own, to share in a livable, human world in which creation is joyfully nurtured as a means to fuller human flourishing. Bilbro shows us how such literature opens our imagination to things in life far more enduring than consumer goods and technological diversions, ultimately to learn to love as we were meant to love.” David Lyle Jeffrey, author of In the Beauty of Holiness: Art and the Bible in Western Culture

“Focusing on seven virtues in particular, Jeffrey Bilbro successfully demonstrates not only how these are articulated in Berry’s works but also how Berry’s literary forms model the virtues themselves. Wide-ranging in its references to Berry, to other literature and literary theory, and to a host of contemporary concerns, the book should be of great value to all readers of Berry as well as to those interested in the rediscovery of the role of the virtues in our moral language.” Fritz Oehlschlaeger, author of The Achievement of Wendell Berry: The Hard History of Love

“Understanding Wendell Berry’s work rightly and appreciating it fully require exactly the kind of intellectual and imaginative agility we get from Professor Bilbro, who is clearly one of our best guides to this nation’s most important living writer. Virtues of Renewal is a plain-speaking book of depth, breadth, and erudition.” Jason Peters, editor of Wendell Berry: Life and Work

“Virtues of Renewal works at several levels. It is a well-written and well-researched book on a contemporary author. Bilbro does his literary criticism well. The book is also a call to rethink ecological stewardship and whole-life stewardship through the literature being analyzed, so it has a heavy dose of practical ethics. Most significantly, the book is a delight to read because the prose is carefully crafted and it points to something beyond its own pages.” Andrew Spencer, from his review of the book.

The book was also reviewed in Choice (“Recommended”), Christianity and Literature, and Green Letters.